Please read the FAQ first before posting an email or replying on the forum as your question may have been asked and answered before.

I also hang around the Minecraft forums a few times a day and it's a place where others may be able to help with your questions or problems, I've also started a Discord server where people can chat about the packs and help each other.

If you're posting a bug report, please list which Resource Pack, Minecraft version you're playing and if you are using OptiFine or not.

I'll try to reply to as many questions as possible but sometimes it may take some time.

Q1: My text doesn't display properly, it's all white squares?

Q2: Does the pack work with OptiFine?

Q3: Where do I put the Resource Pack?

Q4: How do I select the Resource Pack?

Q7: How do the shooting stars and sky box work in this pack?

Q8: Can I use the John Smith Legacy packs on Bedrock (PS3, PS4, Switch and Xbox)?

Q9: What's happened with the stained glass? I liked the old version

Q11: MultiMC launcher and a much newer version of Java?

Q12: Why don't you support the Bedrock Beta release of Minecraft?

Q1: My text doesn't display properly, it's all white squares?

This is no longer relevant as the font files for now 64px per characters.

Minecraft earlier than 1.13 only supports bitmapped font rather than the vector based open type font like Minecraft 1.13 or greater, I've made the font the highest quality possible at 256px per character.

The default John Smith Legacy Resource Packs contain the 256px version of the font as this version has a lot more detail but can cause issues with some older hardware.

If the in game text doesn't display properly and it's all white squares then this means you do not have enough texture RAM on your graphic card for the 256px font files, this usually occurs on older hardware, integrated graphics and some laptops.

17th December 2021 Update: All the packs that use the bitmapped font now use 64px font so this issue will no longer be a problem.

Q2: Does the pack work with OptiFine?

Minecraft 1.8.9 introduced some new features like blockstates and models, with these new options, Resource Pack authors can change quite a bit more then was possible before but some of the more advanced things still require OptiFine.

Things that are now in the Vanilla game

Things not in the Vanilla that OptiFine adds to pretty up the game (crossed out items not working but are in the pack and work with MCPatcher).

While the pack will work fine in without OptiFine, to get the best out of the packs use OptiFine.

NOTE:- Minecraft is updated all the time so issues of compatibility may arise, living on the cutting edge with Snapshots will always cause issues, please be
patient and post issues in the Minecraft Forums as that's the quickest way to get a response.

You don't need OptiFine to play Minecraft with the John Smith Legacy Resource Pack but if you do, you do get some nice features.

Q3: Where do I put the Resource Pack?

This is based on the Java PC version of the game as this is the release I play, it may be different for the other Java releases of the game.

Where do I put the Resource Pack?

Or alternately if Minecraft is installed in the default location you can:

Copy or Move the zip file you downloaded "John Smith Legacy JSC 1.16.1 v3.zip" into the ".minecraft/resourcepacks" folder (you don't need extract it!).

Q4: How do I select the Resource Pack?

Sometimes there may be snapshot packs available, these Snapshot releases will only work in Minecraft Snapshots.

The pack has defaulted to the Open Type Font.

UPDATE: This is no longer required as the packs have defaulted back to the Bitmapped fonts as of 1.16.1 version of Minecraft.

If your game crashes when loading the pack you will have to rename some files in the pack.

This will make the resource pack use the bitmap font instead.

Note:- Windows Explorer cannot edit files in the zip folders, you need to unzip the pack using an archive program like 7zip or WinRAR.

I still don't know exactly why some people have crashes and others don't when using the Open Type Font.

I've only tested it on the two computers I have, it crashes on my NUC but runs fine on my desktop.

It would be nice to find out exactly why the game crashes.

From my limited testing it would seem that integrated graphics would be the cause but it's hard to say as I've only tested it on two computers.

The reason that the OTF is now the default font in the pack is:-

Open Type Fonts are vector based, they can be scaled to any size and are equally readable at all sizes (sharper and less fuzzy than the Bitmap font), however some characters will still be bitmapped for the Accented and Nonlatin European text.

The kerning (space between characters) is more accurate, here's a wiki explanation of kerning.

Q7: How do the shooting stars and sky box work in this pack?

This pack has the North star and shooting stars (they work with OptiFine and MCPatcher), the sky has a second cloud layer that moves at a slightly faster speed, this creates a great parallax scrolling effect.

Don't forget to turn off the clouds in the menu due to bugs in the way the Minecraft clouds are rendered, they look fine when you look down through them (fly above them) but a all pixelated when viewed from below (they are turned off automatically when using OptiFine).

The directory listed below has all the files for the sky, all the textures are completely separate and you can have just one shooting star if you like by just removing the properties files for the layer you don't want.

The 32 'properties' files have all the details, I've listed what each one does below.

There are some fantastic things that can be done with better skies.

Q8: Can I use the John Smith Legacy packs on Bedrock (PS3, PS4, Switch and Xbox)

The short answer is no, the packs are not on the Bedrock Mmarketplace.

You can only use the pack on these devices - Android, iPhone/iPad, Windows 10, Oculus Rift, Gear VR and Amazon.

There is a way of getting it on the Xbox which is not supported and you will have issue using that method.

Q9: What's happened with the stained glass in 1.16? I like the old versions

I knew the new glass would not be to everyone's liking so kept the old glass textures in the pack (_alternates directory).

You just have to copy the alternate over yourself, there are also other alternate in that directory too.

Delete these model files or some of the glass will have broken textures.

Copy and replace all the files.

And that's it, you will now have the old stained glass.

Copy and replace all the files.

John Smith Legacy (JSL) is the more traditional rough style and is trying to keep the look and feel of the original author JohnSmith.

JimStoneCraft Edition (JSC) uses the smooth cobblestone, smooth ores, smoother looking sandstone and lots of other personal tweaks to quite a few of the textures and is the pack I personally play the game with.

Q11: MultiMC launcher and a much newer version of Java?

The version of Java that Minecraft uses is very old (Java 1.8) and also personally I find the official launcher a pain to use for multiple versions of Minecraft and it's annoying to use for the modded game.

I've been using MultiMC for years as it's much easier to have multiple versions of Minecraft for playing on older releases of the game or when playing with snapshots, mods, Fabric and Forge support are there too.

It's also great for keeping versions of the game separate for backups, no more trying to find those hidden Minecraft files on the C drive %appdata%/.minecraft/, put them where you want.

Here's a screenshots of my MultiMC setup with all the versions I work on plus a few of the older CTM maps I play about with sometimes.

Each version has it's own settings, Minecraft version and resource pack, this mean I can run 1.17 (snapshots) while it doesn't mess with previous working versions.

As it's in the name MultiMC, yes you can run multiple versions of Minecraft all at the same time (hardware resources permitting), even different Minecraft accounts if need be, good for testing local multiplayer settings or running a camera account. 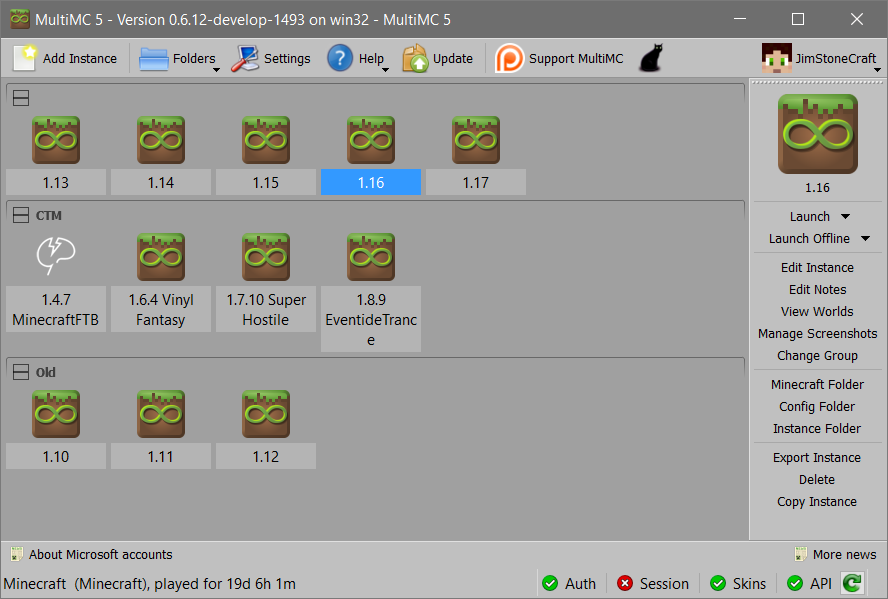 This is how the directories look in Windows, I put Java in the jre_java directory, then I click the Settings button in MultiMC and choose that version of Java, my path is listed below, it all depends on where you put you Minecraft directory. 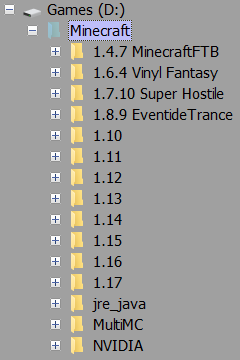 I download the Windows x64 Compressed Archive version as it's just a zip file you put wherever you like (I put it in the same folder as MultiMC in a directory called jre_java), then start MultiMC and tell it where you have Java installed.

Also with the zipped version it makes Minecraft portable as it all runs in it's own directory (so you could run it from a USB thumb drive for example).

Q12: Why don't you support the Bedrock Beta release of Minecraft?

Resource pack development for Bedrock is a lot harder than Java.

First you need to know what's changed, with the release versions of the game, I download the Vanilla pack from the official site for making resource packs.

The unchanged resource and behavior files are listed in the What's Next? bit near the bottom.

Things get removed, new things get added, quite a lot can change between releases.

Lets just say that the ui_common.json is different from last release to the new release, I have to compare the vanilla files to see what's changed and then compare it to my modified version in the John Smith Legacy pack, test it in the game to see if it works as intended.

If a texture is missing in a Beta then it would just show a missing texture, if one of the UI json files change (and they do with each release of the game), then it could crash the game or cause the game to not work correctly.

Now files change with each Beta as features get added or removed and bugs get fixed, it's just infinitely easier to develop on Java and only support only the Bedrock full releases.